New plate chiller in the works

I'm in the process of making a new chiller for the wort (unfermented beer), to replace the borrowed immersion chiller I've been using. This new chiller is a plate chiller, or counter-flow chiller. The 30 plate chiller is a heat exchanger which runs cool water through one side, and hot wort through the other side. As the hot wort/cold water flow past each other, it rapidly exchanges the heat, which should cool the wort from boiling to pitchable yeast temperatures (65 degrees) in about 5-10 minutes. The immersion chiller I've been using takes about 45 - 60 minutes.

Not only does this save significant time in the brewing process, it also helps lock in flavor, aroma, and reduce potential bacteria infections.

Here is the plate chiller I'll be using, which can be found at dudadiesel.com. Once I get it built, I'll post some photos of the whole set up. 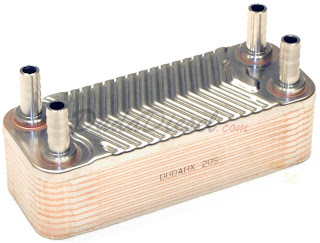