The plate chiller I wrote about in my last post arrived and I finished buying the other parts I needed and put it all together the other night. Here's a picture of the whole set up: 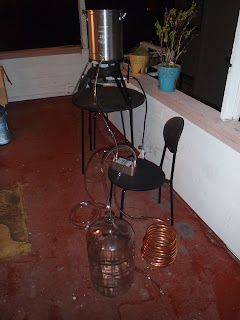 This plate chiller is available from dudadiesel.com. I was amazed out how small this little guy is - about 3" x 3" x 8". It's amazing to me that I can cool 6 gallons of boiling liquid to 65 degrees in a matter of a few minutes using this set up.

How it works
The chiller system I'm using utilizes a plate chiller, which is a counterflow heat exchanger (wort enters one side, cool water enters other side and they flow past each other, separated by plates), and a pre-chiller copper coil that sits in a bucket of ice water. A garden hose is attached to the copper coil and cool water (approx 70 degrees) enters the copper coil, which cools the water (hopefully to 40 degrees or so). The chilled water then enters the plate chiller and cools the boiling wort that is flowing into it from the boil kettle. Once the wort passes through the plate chiller, it dumps into the fermenter at the appropriate temperature.

Installed ball valve into kettle
I first had to install a weldless ball valve into my boil kettle which I bought through Northern Brewer. Now that I have it, I realized I probably could have built this little assembly myself, but I wasn't sure of what all went into it. Now I do, so I'll build it myself next time for probably 1/2 the cost ($32 shipped). Fortunately, my kettle is aluminum, which made it very easy to drill through. I located it as close to the bottom as possible so I can drain as much wort as possible. I realized later that now it hits on the rim of the turkey fryer, so I'll have to modify the rim a bit now.

Pre-Chiller
I used 1/2" (O.D.) x 20' soft copper to make the pre-chiller. Many articles I've read say to wrap it around a round object (like a 5 gallon keg). I didn't see the point and just worked it to the diameter I wanted by hand. Very simple to do!

Set up of Chiller
I set up the components of my brewing system how I wanted them. Then I simply cut 1/2" tubing to the appropriate lengths to connect all the components together, added a few hose clamps and voila! The system was complete!
Posted by Curtis at 4:11 PM