We decided to attempt a double brew day today and pulled it off remarkably well. I created a schedule for the day on Excel to plan out the day. I estimated that it would take 7 1/2 hours as opposed to the normal 5 1/2 hours to brew one batch (including set up/clean up). I was very pleased to see at the end of the day that I finished up the brew day 7 hours, 25 minutes! I guess working years in construction project management has helped me be able to put together an accurate schedule! There are some efficiencies that that I could be made to reduce it, but, that will involve more equipment and cost, so I probably won't act on that at this point. When I do start buying more equipment, it'll be to go to a larger (10 or 20 gallon system).

We brewed up our Double IPA or San Diego Pale Ale - Damn Chizzam! It seems to have turned out well, but my OG was lower than expected, I'm not sure why since my pre-boil gravity was right on target.

For the second batch, we brewed a Belgian Saison. A saison is normally aged for quite awhile, so I'll probably have some available in a month or two, then bottle condition (age) the rest. It should be a somewhat funky, light summer time beer. I'm not going to crazy with this batch. The recipe is essentially my Rye Pale Ale recipe (slightly modified grain bill), with a completely different hop schedule. The local home brew store was out of 2 of the 3 hop varieties I wanted, so I ended up with Northern Brewer bittering hops, Fuggles bittering/aroma, and Saaz for aroma. I used the White Labs Belgian Saison WLP565 yeast. From what I've read, most of the magic in a Belgian Saison is derived from the yeast strain. I'm excited to see how this one turns out!

I also tried an iodine test on both batches during the mash. It was interesting to see when starch to sugar conversion took place. Most of the conversion happened at the very end of the mash. 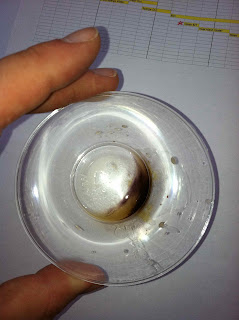 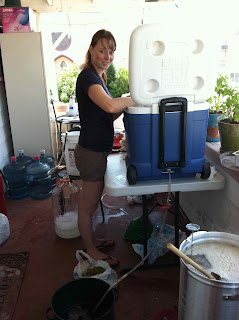 In the middle of two batches, cleaning up the mash tun, boiling wort, and getting ready to chill 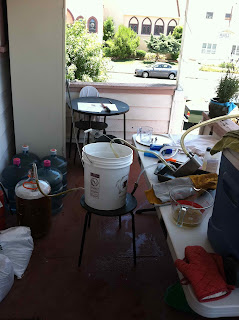 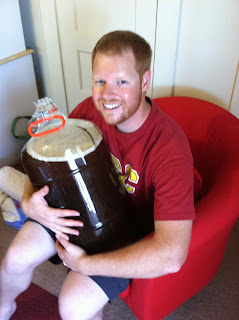 The finished wort! Yes it's my beer baby! 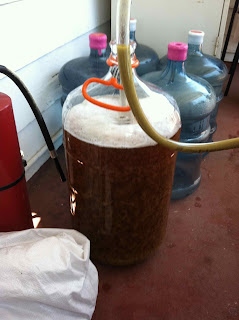 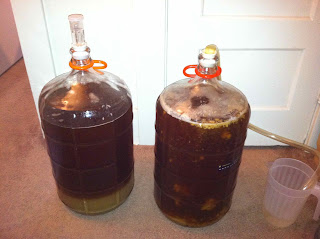