It's been a while since I provided an update to my Kombucha SCOBY mushroom starter experiment. After a couple of weeks, I had a nice little Kombucha mother mushroom growing (see below). It frankly looked hideous, but I was able use that as a starter to begin growing a number of "baby" mushrooms. I grew the mother mushroom into a large mushroom by pitching it into a 3 gallon batch of tea stored in a 5 gallon food grade bucket. That batch sat too long and turned very vinegary, but it produced an excellent environment to propagate additional kombucha babies, which it pops out a new one every 1-2 weeks.We gave one to Liz's sister Esther who graciously supplied the photos for this post (visit her post about it here.)

My wife brewed up a fresh batch of tea several weeks ago and pitched the baby SCOBY shown at left into the fresh batch. Within a week, the tea had turned into kombucha and was ready for bottling. Liz and her sister had a little bottling party and used several different flavors including plain kombucha, kombucha with juice, and a third with fresh raspberry and ginger root.

All turned out quite well. A slight cider vinegar aroma on the nose, but a fresh kombucha flavor when drunk. The ones with juice were a bit sweet. The bottles with the raspberry and ginger root were fantastic. Carbonation was a bit light, so we just need to try to bump that up next time. All in all, it turned out very well - we've got another batch fermenting now! 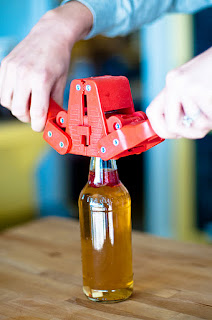 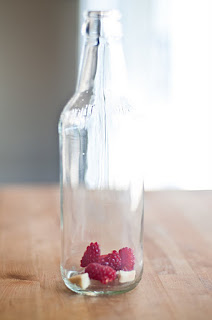 Email ThisBlogThis!Share to TwitterShare to FacebookShare to Pinterest
Labels: Kombucha