I've been working on perfecting my Imperial Oatmeal Stout recipe (Pirate's Breakfast) for quite a while now. I've brewed it 5 times now with a coffee oatmeal stout thrown in there, so really 6 times. In any case, I call this one Pirate's Breakfast #5, or for short, PB #5. PB #5 is getting much closer to my ideal oatmeal stout. Frankly, I've never had a beer that tastes exactly what I'm shooting for, but that's really the whole point of creating this beer. I think that my next attempt at brewing this should be spot on for what I'm shooting for. This beer roughly falls within the Oatmeal Stout, 13C BJCP category, however, since it's "imperial" it doesn't exactly fit. The OG is 1.080 and the IBU's are 50. The style calls for a max OG/IBU's of 1.065 and 40 respectively. Aside from that it falls within the category quite nicely.

Appearance: Jet black, seems to be perfectly clear with now haze. Pours a thick tan head that persists for a couple of minutes then disappears almost entirely.

Flavor: Strong roast malt hits up front with a little chocolate and perhaps a bit of coffee. Flavor starts to fade slightly then a nutty, toasted oatmeal comes rushes. This character lingers on the back of the tongue and roof of mouth for quite some time.
Mouthfeel: Medium body, moderate carbonation, great carbonation level for this style. Leaves front of tongue dry and after drinking a few ounces over a period of time leaves most of mouth a bit dry. Fuller mouth feel towards side and back of mouth initially.
Overall Impression: Rich and ark with intense roast character up front which quickly gives way to a delicious toasted oatmeal character that lingers. Chocolate and coffee flavors present, but these are dominated by roast, nutty, toasty character. More body is needed and preferred by me, but falls within acceptable range of this style. A very delicious beer, but still room for improvement. 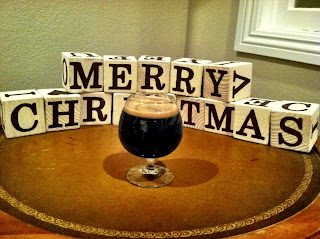 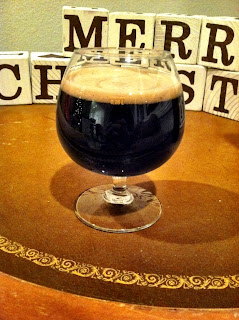