My assistant brewer (my wife Liz) completed another brew day by herself, while I was recovering from a wicked case of food poisoning the day before. I would stumble out occasionally to get in the way and cause trouble help her and then head back in to the house to recover for an hour. She finished in 8 hours - which even included measuring out all the malt, milling and cleaning up by herself. Pretty impressive! We She brewed up our 40th and 41st batches of beer, with a Black IPA (5th version) and Belgian IPA (2nd version). She tossed the dark malt (Carafa II dehusked) to darken the IPA into a black IPA into the mash at the end with about 20 minutes left to try to get the dark color with less of the roast character. We'll see how it turns out! 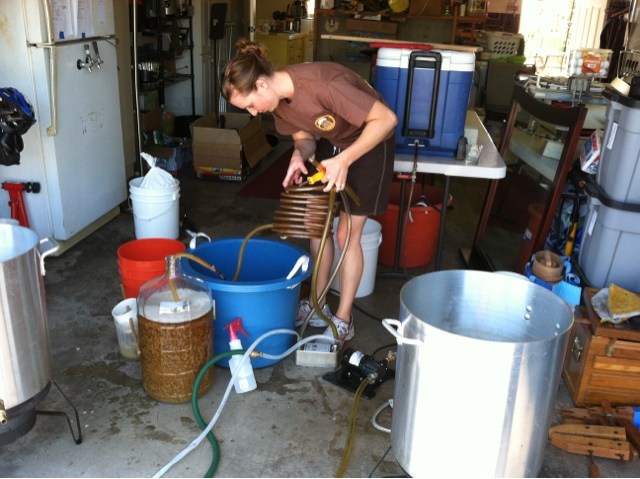 This last Saturday (July 21), Toronado San Diego held a Russian River Consecration 10 flight tasting session. For $30, we got (10) 3oz pours of 10 different batches of Consecration, starting with Batch 0 which from my understanding wasn't an official public release beer originally. Toronado held back 1 of each set of kegs of Consecration they received over the past few years and Russian River let them know that the original 2008 era batches may be reaching their peak and could start to decline soon, so they released them all to the public. This was an incredible tasting flight to experience! We nursed these for a long time and took about 2 hours to go through the different beers. It was fascinating to compare so many different batches side by side and see how well Consecration improved with age. If you have your hands on some newer batches, I'd recommend laying them down for a couple years. You'll experience a sour beer that has a full rich dark fruity character as compared to the newer that have a more biting sourness and a lighter almost strawberry characteristic. 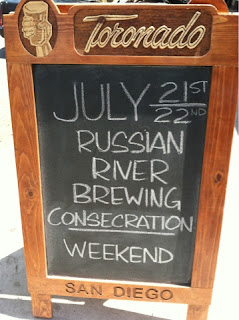 Posted by Curtis at 2:56 PM No comments:

Last Sunday brought the annual San Diego County Fair home brew competition with an incredible 1,242 entries in all 28 of the BJCP categories. (2 of the categories were split into subcategories so there were a total of 30 categories) Liz and I judged the IPA category (our second time judging at the fair and first time judging since taking he BJCP exam). The common experience most of the judges had was a lack of hop aroma in most of the beers, which was surprising for San Diego brewers - lack of hop character in general is not a problem.

Our Pale Ale (originally brewed 4 months ago as an IPA) ended up taking 1st Place in the Pale Ale category! We were completely shocked, having never expected to win in this category which had about a 100 entries in this category alone! All the 1st Place entries (30) were then placed in a Best of Show round, which had a BOS winner and 4 Honorable Mentions. Our Pale Ale took Honorable Mention, placing it in the top 5 beers of 1,242 beers!

The Pale Ale was a simple recipe with 2 row, Crystal 40, Munich, a little sugar, and Cascade/Centennial hop additions. It was stored for 4 months at room temperature. I actually planned on entering another beer I brewed specifically for the competition and then "discovered" this beer in the closet (having forgotten about it). I did a side by side comparison and decided to enter the "aged" beer instead. Sometimes it's better to be lucky than good!