Firestone Walker, located in Paso Robles, CA was definitely one of the highlites of my trip to Northern California. We stopped in first at the Brewery Tasting Room, had a few tasters then went on a brewery tour. We were impressed how knowledgeable all the staff were in about beer. Each time they handed us a taster, they would tell us a description of the beer, such as how it was brewed and what characteristics were in the beer. Our tour guide was probably the most knowledgeable about beer and of course the brewing process. Firestone clearly has an excellent training program which includes ongoing training for their servers. The employees are given triangle tests at least weekly to see if they can pick out the one different beer, to help ensure quality of the product and improve their tasting repertoire.


Traditionally, a union system (later referred to as a Burton Union after becoming linked to its use in the Burton area) is a network of several wooden casks and troughs interconnected via copper plumbing. All of the casks work in union during fermentation, commingling their beer and yeast. As the beer ferments, pressure pushes some liquid up into long troughs above the casks (like blowoff in a homebrew setup), where the yeast settles out of suspension and the remaining volume of beer trickles back into the casks. This allows for easy harvesting of yeast — essentially a form of top cropping — for immediate reuse. It also minimizes the loss of beer through blowoff. 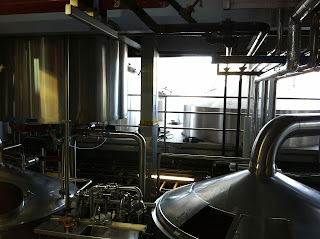